Medicare shopping and switching during the AEP was down across the board according to a new report published by Deft Research.

The 2016 Senior Shopping and Switching Study revealed that only 51% of Medicare consumers shopped during the 2016 AEP, down from 70% just one year earlier. The study also found a decline in switch rates – dropping from 15% to 11%. The chart below shows this 2-year trend in shopping and switching rates among all Medicare consumers. 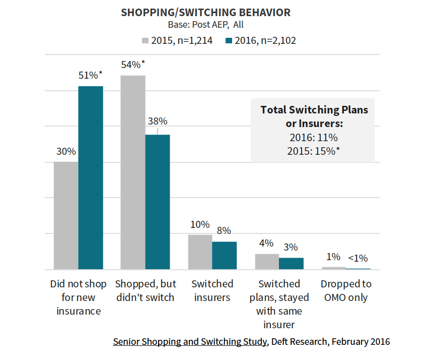 4 KEY REASONS FOR THE DECLINE IN ACTIVITY
We attribute the drop in activity to several changes in the market landscape: