In November of 2015, Deft Research published the 2015 Medicare Member Experience and Engage-ability Study. Now in its 10th year, the study measures loyalty among members of Medicare plans. By examining consumers’ experiences with their plan, we are able to identify which factors are the most influential in satisfying and retaining members. 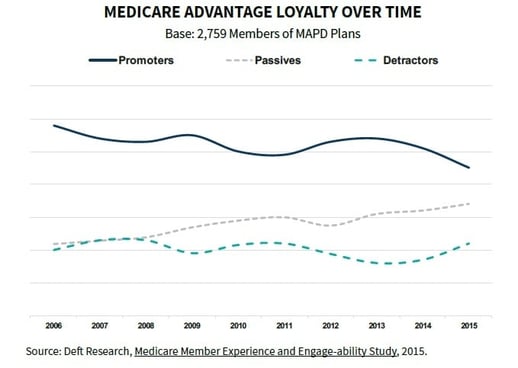 The graph shows that the most dynamic consumer loyalty groups are the Promoters and the Passives. The Promoter line has persistently trended downward, at a rate of about 1% per year, on average. The Passive line has trended upward at approximately the same rate. Even though the lines are not steeply sloped—because they are ten year trends—they are not good news.

The graph shows that health plans have been good at holding the line against the most severe dissatisfaction. The Detractor line is flat and actually has a slightly negative slope over this time frame. However, health plans have only succeeded in moving more people into the Passive class. And recently, Promoters are dropping out and into the other groups.

WHAT'S BEHIND THIS DECLINE IN LOYALTY?

The study tells us that the fundamental problem is a rise in out-of-pocket limits. This creates a cascade of issues that culminate in a bigger problem. As health plans have tried to hold the line on premium increases, consumer cost-sharing has increased. According to the study, total average annual out-of-pocket limits for Medicare Advantage enrollees have increased by $700 over the past two years, after remaining flat for three years before that.

Further evidence of consumer disenchantment with their cost sharing is provided. This year, 42% of seniors are dissatisfied with the costs of brand drugs, and 33% are dissatisfied with medical costs. These cost issues have been persistent. For the past three years, findings have tended to focus on brand drug costs and the costs for seeing a specialist as the prime issues.

As cost-sharing goes up, the out-of-pocket for out-of-network coverage becomes steeper. To alleviate costs, many plans have narrowed their networks, creating access issues for some consumers. As networks are stretched by a growing population, it becomes more difficult to obtain a timely appointment with a specialist.

And so, the study finds that in concert with increasing costs and attempts to alleviate them, access to care is a major cause of this year’s loyalty drop.

Costs provide the material background for the loyalty trend, but they aren’t the whole story and they don’t have the greatest impact. The study also provides rich detail on related causes of decreased loyalty.

For example, another finding from the study fills out a picture of the Medicare Advantage member experience. Consumers are less happy with plan communication than with anything else. 56% are dissatisfied with their Explanation of Benefits, and 60% don’t believe in their insurer’s capacity to help them understand how to use their benefits. Lack of communication leads consumers to a lack of confidence that they can obtain benefits, and a fear that an unknown obstacle is about to present itself. And it destroys loyalty.

Health plans are operating under difficult circumstances that require them to re-engineer benefits while engaging their members. According to the study, the communication function has risen to a level of pre-eminent importance. And in some sense, it is good news that a large part of the problem has been isolated. Consumers want their networks and formularies to be consistent and stable. But, if they can’t be, then consumers want explanations and assistance making adjustments. To do this, health plan communications will need to become more capable of addressing individual member’s specific circumstances and needs. Make it personal, consumers will welcome it.

The 2015 Medicare Member Experience and Engage-ability Study is based on the responses of 5,797 members of Medicare Advantage, MedSupp, and PDP plans across the United States. The study was fielded in July of 2015. The report includes performance scorecards for the largest national and regional plans.

To purchase a copy of this report:
Please contact George Dippel at gdippel@deftresearch.com or 612-436-8321.