According to Deft Research's latest Medicare report, the 2015 Age-in Study, the percent of 64 year olds without health insurance has dropped from 17% to 7% since 2013. Our analysis took a deeper look at this drop to better understand who has benefited from the Affordable Care Act (ACA) and who has not.

The table below shows the drop across selected demographic categories between 2013 and 2015 in rates of Medicare Age-ins without insurance. 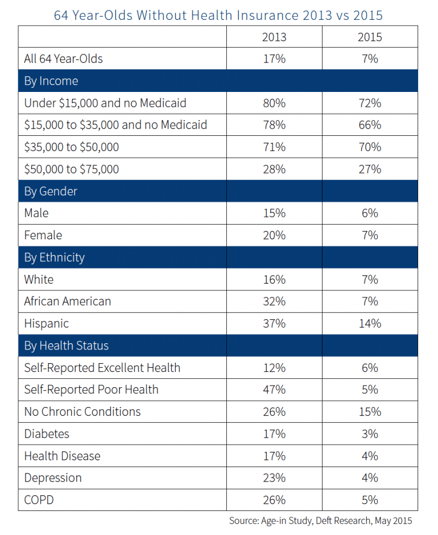 WHO HAS BENEFITED FROM THE ACA’S EXPANDED MARKET?

The table shows that lower income persons, women, African Americans, Hispanics, and those who self-reported being in poor health are the groups with the most dramatic drop in percentage without insurance. In 2013, lack of insurance was concentrated in these groups. The ACA has enabled under-served groups such as these to obtain insurance.

While the benefit to under-served populations is worth noting, to have a complete picture, we must also account for the size of each group in the table. Considering incomes above and below $35,000, we find that about half of newly insured Age-ins fall on either side of this demarcation. So while the drop in lack of insurance was most dramatic among lower Income persons, half of the newly insured have higher incomes (above $35,000).

The same is true for minority populations. African Americans and Hispanics have steeper drops, but half of the newly insured are white because 70% of the population is white. And, people in poor health make up an even smaller slice of the overall population (7%). The statistics show that lack of insurance dropped from 47% to 5% for those with poor health, leading poor health Age-ins to account for 25% of newly insured.

WHO HAS NOT BENEFITED?

Very low-income persons, who do not have access to either Medicaid or employer-sponsored health plans, have not benefited from the ACA. The only coverage option for people living at this lower income (less than 133% of FPL) is to pay unsubsidized premiums or enjoy the expansion of their state’s Medicaid program. The study captures people living at the lowest levels of income in states where this expansion has not occurred. A super-majority (63%) of this group does not have insurance and that has not changed between 2013 and 2015.

WHAT DOES THIS DROP MEAN FOR MEDICARE INSURERS?

The dramatic drop in those without insurance, means that more Age-ins will arrive at Medicare plans having recently received more health care and will potentially have less pent up demand for services, and fewer undiagnosed diseases. Seeing that many with the worst health have taken advantage of the ACA is also good news for Medicare plans as it indicates that some of the high utilization of these groups will have been absorbed by ACA plans, and won’t have to be absorbed by Medicare.

In 2015, more than one in three Age-ins purchased health insurance through the Individual Market. These consumers will have had prior experience with shopping for health insurance, similar to what they will encounter when shopping for Medicare. Specifically, more will have used plan comparison tools, worked up the nerve to seek personal assistance, and some will have visited retail locations. They will be more prepared than ever to understand the value propositions presented by Medicare health plans.

Deft Research’s 10th annual Age-In Study was published in May of 2015. The study captures the preferences and attitudes of 64 year-olds as they begin their path to Medicare enrollment. The report is designed to help health plans and marketers develop Age-In and Late-to-Medicare specific strategies, tailor marketing messages, design products to meet the needs of specific market segments, and plan engagement activities at the right times of the year.