Positive Prospects for ICHRAs
by Sarah Park and Jack Stone

In January 2020, new rules from the Departments of Labor, Health and Human Services, and the Treasury permitted employers to offer Individual Coverage Health Reimbursement Arrangements (ICHRAs). Unlike traditional employer-sponsored insurance (ESI), employees purchase health insurance on their own directly through a carrier or on-exchange, and their employer reimburses part or all of their monthly premium. Our findings indicate that when compared to employer-sponsored health insurance, both employers and employees using ICHRAs say that costs for employees’ health insurance is less and the plans offered by ICHRAs are better. The reluctance for firms that have not switched to ICHRAs is primarily based on a lack of knowledge surrounding the arrangements.

The basis for interest in ICHRAs is clear. Deft Research’s Employer-Employee Group Insurance Study reports that for 46% of employers, payroll deductions increased 6% or more in 2022, and more than 20% saw increases of 11% or more. Meanwhile, costs for Affordable Care Act (ACA) plans are going down, with the national average premium for silver plans dropping 9% since 2018. Rising costs in ESI and falling costs in the ACA market are motivating employers to consider alternatives to their current plans. The Department of Health and Human Services apparently agrees. They estimate that within the next ten years, 800,000 employers will offer ICHRAs to help pay for coverage for more than 11 million employees and their families. Of those 11+ million, an estimated 800,000 previously uninsured people will gain coverage.

As seen in the chart below, the perception of employees with ICHRAs is rosier than the perception of those without. Our research estimates that 38% of employees with ICHRAs believe they now have more choices than they did with traditional employer-sponsored coverage. In contrast, among those without ICHRA-based benefits, only 27% believe they would have more choices if they switched. 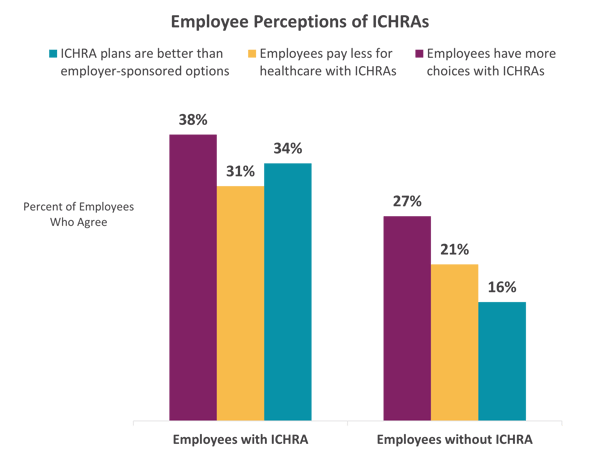 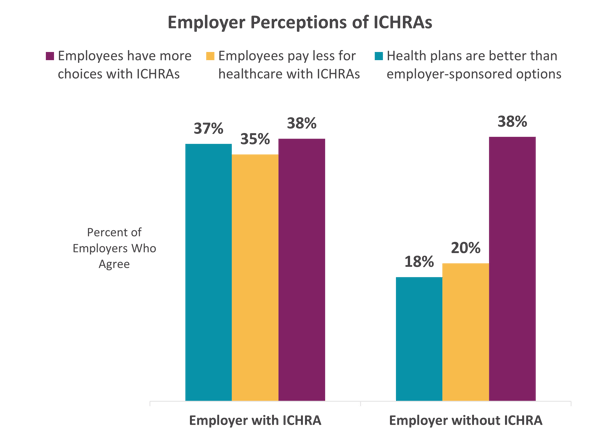 Many employers and employees who switch to ICHRAs indicate they save money, have better plans, and are at least very satisfied with them, but a large proportion of those with traditional employer-sponsored plans don’t see ICHRAs that way.

Learn more about Deft Research's employer-based health insurance studies and capabilities by submitting your email below.