What Can We Learn from Simple Measures of Digital Health Technology Use?
by Richard Hamer

Digital Health Technology (DHT) is critical to the future of health system performance -- but only if it achieves the scale necessary to be a meaningful factor in cost control.

The infographic below provides important results for this discussion.  It presents results from two surveys of health insurance plan members in which we asked about consumers' awareness, download, and use of their health plan's mobile app.  Respondents to these surveys included members of Medicare Advantage plans and persons under 65 obtaining health coverage through Individual and Family Plans (Affordable Care Act plans) or Medicaid. 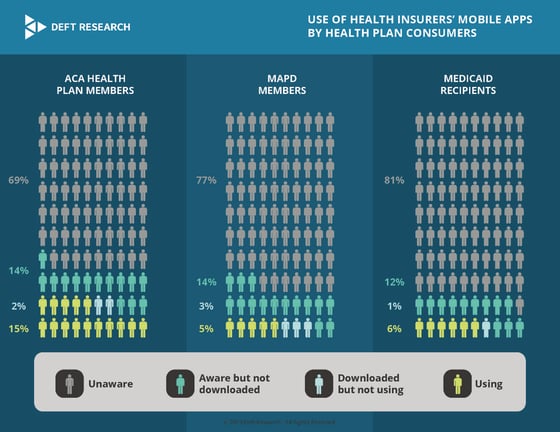 Discussion:  The heightened awareness and downloads of mobile health apps among IFP consumers may be due to several factors.  First, in this sample the average age was 42 years old, and so youth might signal a greater likelihood of an app-friendly lifestyle.  This, in turn, might increase the chances that an IFP member would know about the existence of apps.

Another possibility is that apps serve unmet needs.  This study showed that app downloads were more prevalent  among those who had significant health issues.  The apps are designed to help navigation, provider selection, and other elements of consumer self-management.  So they are downloaded because they are needed in the context of a new diagnosis, or an on-going health concern.  Apps that provide information about costs and provider cost comparisons may meet another unmet need and so motivate awareness and download.

A third possibility is that health insurers have had better success communicating the value of their apps to the IFP market.  Compared to Medicaid populations, IFP populations are much more likely to be aware of their health plans' apps.  The most likely explanation for this is that insurer apps aren't as common for Medicaid plans, and that Medicaid populations haven't been sent, or haven't regarded, the message regarding an app's availability.

About the Studies:  Each year Deft Research surveys over 50,000 consumers on subjects related to health insurance and health care.  The data presented above is derived from the responses of over 6,000 consumers who completed one of two online questionnaires.  Reports entitled, the Individual and Family Plan (IFP) Member Experience and Engagement Study and Medicare Member Experience and Engagement Study are available for purchase.

Learn more about research for hospitals and health systems.