Preliminary studies have reported that since the start of the COVID-19 pandemic, the rates of depression, anxiety, and stress among all sorts of people have been increasing (The Lancet).

Using data collected in June from 2,600 employees and ACA health plan members, we investigated life events and health stressors to see which are most closely associated with diagnosed mental illness. While this article focuses on commercially insured persons, we expect that similar results would be found if we were working with data from populations receiving Medicaid or Medicare benefits.

National Policy. Two laws, the Affordable Care Act (2010) and Mental Health Parity and Addiction Equity Act (2008), have set standards for the mental health benefits found in commercial insurance.  Among the provisions, most individually sold health insurance plans and small employer group plans are required to cover mental health services.  Large employers may not be required to provide this coverage, but most do. Generally, the commercially insured population has mental health coverage that meets the standards.

Prevalence of Mental Health Issues and Treatment. According to the National Institute of Mental Health (NIMH), nearly one in five adult Americans live with mental illness. In our research of the commercially insured population, we have found that about 10% of employees self-report as having been diagnosed with a mental illness (depression or other mental illness). The American Hospital Association reports that less than half of mental illness cases are treated professionally (AHA).

Compared to other groups, commercially insured persons, aka employees, are well-off – as measured by income, general health, and the security of having health insurance. But, despite appearances, significant percentages experience stressors – and we find these are associated with mental health issues. NIMH says that stress not only leads to mental illness, it can also compromise the immune system and exacerbate physical health problems (NIMH).

Mental Health at Work.  According to a study conducted by the Centers for Disease Control, employees at high risk of depression also had the highest health care costs (CDC). In a separate study, the Department of Labor concludes that it is important that employers understand how to foster a mental health-friendly work culture (DOL). The DOL says, this is in employer interests because such action will support greater productivity, reduce insurance costs, and improve employee retention and morale.

Stressors Among Employees (experienced in the past year)

We hypothesized that stressors would be correlated with a diagnosis of mental health. But we do not draw an arrow illustrating which causes which.  Suffice it to say the two -- life events that create stress and mental illness -- interact.

Stressors are Associated with a Greater Likelihood of Diagnosed Mental Illness 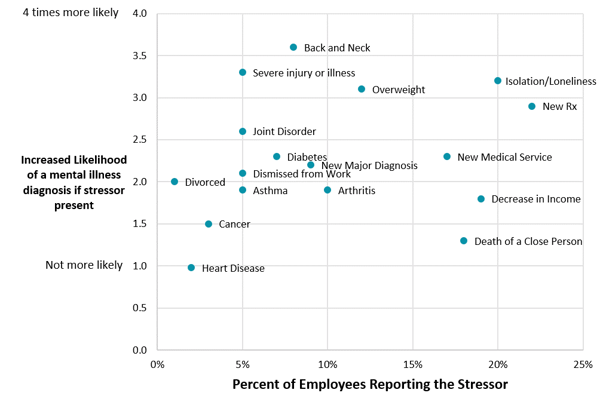 The chart above shows how much more likely a person is to have a diagnosed mental illness if they experience a stressor. For example, compared to persons who have not been recently divorced, a person who has experienced a divorce is two times more likely to have the diagnosis.

According to these data some stressors are very common. For instance, “increased feelings of isolation and loneliness” is reported by one in five employees. And, if experienced, employees are 3.2 times more likely to have a diagnosis of mental illness. If the AHA’s findings are true, the prevalence of mental illness among persons feeling isolated and lonely would be even higher but undiagnosed and untreated.

Physical problems are also related to mental health. We note the results above for injuries, new major diagnoses, chronic back, neck or joint disorders, and being overweight. The findings say that each of these physical maladies interact with mental health issues.

Our findings say that employee populations are less likely to have a mental illness. But it is common for employees to experience stressful life events, and studies show that stress leads to depression and contributes to the severity of physical ailments. Studies have shown increasing rates of depression, anxiety, and stress among all people since the pandemic began.

Our finding that 20% of commercially insured persons report “increased feelings of isolation or loneliness” fits into this picture. It puts a spotlight on another way employees and employers are impacted by the pandemic and alerts us to how this impact could go undetected.

Insurer Leadership. Given the increase in persons working from home, we believe employers would be interested in intensified insurer-led programs that lead to better assessment and treatment of need. In the past months, precipitous drops in the volume of medical services performed indicate both medical and mental health issues are not being treated. Below we have envisioned desirable outcomes of insurer leadership, including outcomes resulting from the indirect benefits of insurer action.